Stay & Play is back!

We sing, read stories, play with toys and have snack time together. Parents, Grandparents, Carers are all welcome to come and enjoy this session for babies and pre-schoolers. It is a wonderful way to help get your child ready for Nursery and School.

We had a new little girl start today with her mum.  She really enjoyed the pears we had for snack.

We had a varied age range from 18 months to 3 years old today.  We sang 'Heads & Shoulders', 'Baa baa black sheep; and 'Twinkle Twinkle little star'.  Our story of the day was 'My dad is fantastic'.  All of the children took a piece of fruit home.

One of our childminders who brings 3 children got very engrossed in the sand today! The children played really well filling buckets, using the shells and chattering about sand shapes.  We had 'A busy day for birds' story and sang nursery rhymes.

We had a really good group of children, parents and carers today.  The children played various activities.  We sand 'Heads & Shoulders' and 'Twinkle Twinkle'. The story was 'Peppa's new neighbours'.  We had orange, pear and apple for snack.

We had our first session of Stay & Play in 2023! It was lovely to be back and catch up with all of our families.

The children were all similar ages today, 18 months - 2.5 years old.  They played with various toys including sand, cars and dough.  We had 'Peppa pig goes swimming' story and we sang some songs and did the actions. It was lovely to be back.

We had a party for the children today.  We had sandwiches, crisps and a gingerbread man biscuit.  They all took home a candy stick and some fruit.  We had a story 'The First Christmas; and we played 'pass the parcel' to christmas music. That was our last Stay & Play now til 2023, see you all in January! 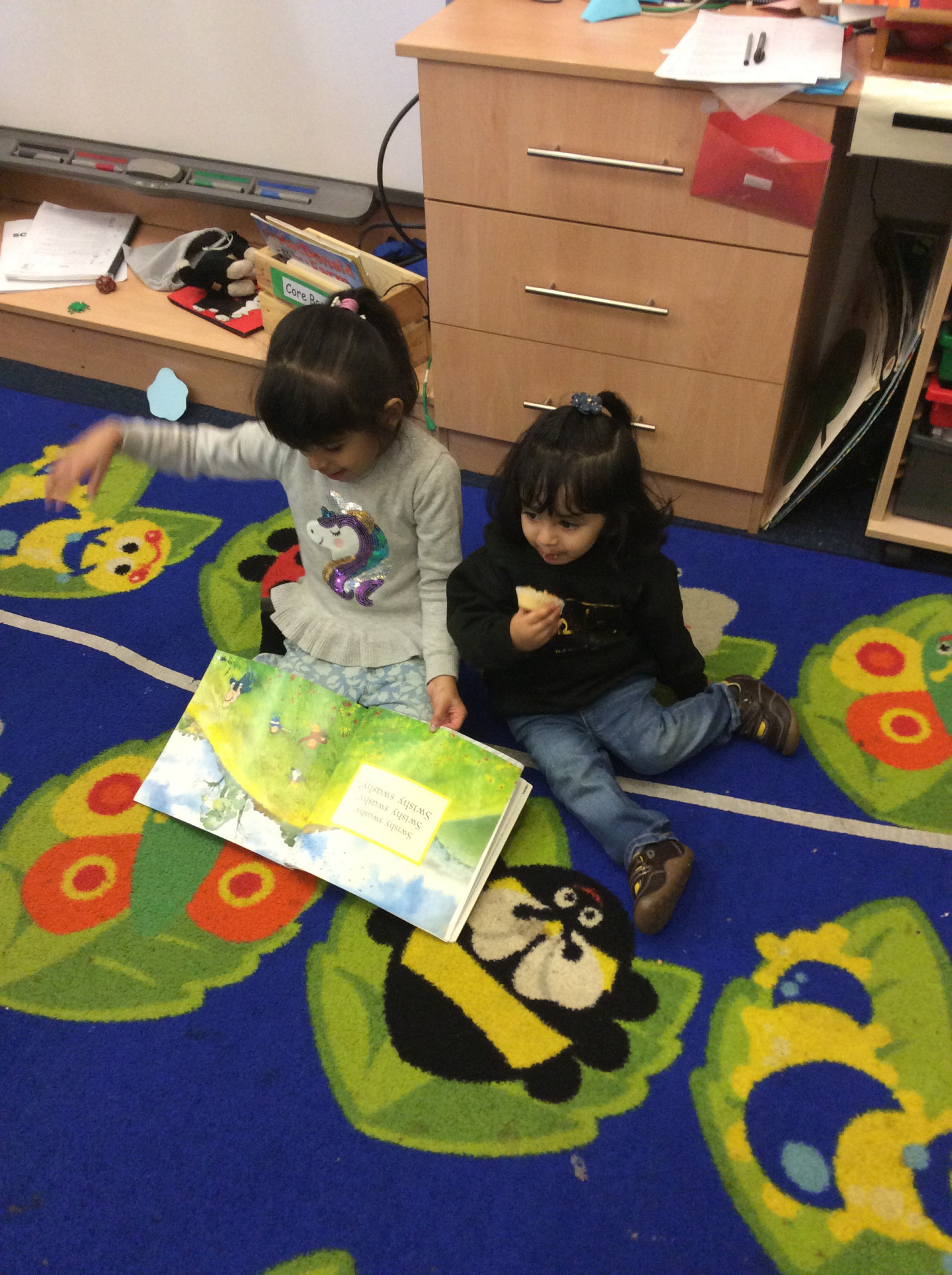 We only had two children today, perhaps due to the cold and frosty weather.  It's party day next week!

The children enjoyed playing with the camera and the toy phone. We sang 3 nursery rhymes and had a story with apples for snack.

Our Stay & Play children enjoyed playing with the farm and the farm animals today, we even made animal noises!  We had a story and a a little girl came out to turn the pages. We sang songs and had apple, banana and pear for snack. They are all good fruit eaters!

Playdough and the train track were favourite activities today.  We had musical instruments at singing time and 'Kiss Goodnight Sam' for storytime.  We had orange, peas and apples for snack.

The children enjoyed playing with the animals and building towers today.  We had bananas, oranges and pears again for snacks and we said our prayer before we ate them.  Our story was "Down in the woods at sleeptime".

We had lots of children with parents this week which was great!  We sand nursery rhymes and the 'fluffy kitten' story. We had apples, pears or oranges for snacks and all of the children ate lots of it.

Our story today was "Wow said the owl".  It was a book a bout colours. We sang The wheels on the bus song, twinkle twinkle and other nursery rhymes.  Drawing and playing in the sand were the favourites this morning.

We had a good group today, mainly toddlers.  The sand was very popular.  So good to see dads and carers coming with their children as well as their mums too.  We sang nursery rhymes.  Our story was 'Spots busy day!'  We said a prayer before we had snack.  The children enjoed banana, satsumas and pears today.

We had a good group of mums, dads, carers and children today!  We had 'Pete the cat' for story.  We sang about Pete's coloured shoes and everyone joined in.  One parent said that her little boy says prayers at mealtimes now like we do at Stay & Play.

We had a good group of mixed ages today, babies, toddlers and older children.  Playdough was very popular today.  We had singing and storytime.  We made all the animals sounds from the book and counted all the animals on the pages.  We had apples and bananas for snacks.

We had a full room of mums, dads and carers this morning, the children played inside and out.We had some new children and parents.  The children mixed well and enjoyed playing with cars and the house.  We sang "ten little fingers and ten little toes".

We had a good group of mums, dads and carers this week.  The children enjoyed the play dough and get wet in the water tray.  We had singing "wind the bobbin up" and "5 little speckled frogs".  Everyone joined in.  Our story was 'Goat goes to Playgroup'. We had an array of colour for our snack, red tomatoes, green pears and orange carrots.

We had 10 parents with children today.  A Brilliant start to our new term.  We had some apples for snacks which were picked in our school orchard on Wednesday.  The children and parents said they were sweet and tasty.

We had a lovely last end of term morning.  We even had an ex-pupil come tp help with his mum today.  We had our drinks and fruit, but then ended with ice lollies which everyone enjoyed.  The children also had a card to thank them for coming to Stay & Play which the Wednesday ladies group had made.

Most of the children played outside today.  They enjoyed pushing the wheelbarrow with the bark in it.  We are encouraging the children to eat fruit and drink milk or water at snacktime.

Another group of mixed ages today.  Some children who are going to our nursery came today.  We had indoors and outdoors open.  We played with playdough making caterpillas and had an amazing array of books for children.  We read the "The Crunching Munching Caterpillas" for storytime.

We played inside and outside this morning.  We also had a birthday boy who was 2 years old so we sang "Happy Birthday" to Zach.

We had the outside open as well as inside.  A lotof children enjoyed playing in the outdoor area today.  It was a lovely warm morning.

We had lots of new children today, as children who are starting Nursery in September were invited with their parents.  We had the inside and outside open as it was a lovely morning!

We had a group of mums and tots today who are getting on really well.  Children are playing with each other and enjoying lots of activities. Mums are having a chat and the children are not as clingy as they were.

We had a new child start today and he settled in really well.  It's lovely to see the mums and dads interacting with the children and also having a chat with each other sitting on the carpet.

We had lots of mums and dads and tots today at Stay & Play.  It was great to see so many children playing alongside each other and sharing toys.

We played with water, sand and paints today.  One little boy enjoyed the zoo and another boy was building with the blocks. Mums said it was really good to be back.

We had 3 new babies at Stay & Play today.  The children enjoyed the sand and looking at books.  The babies were on the carpet with soft toys.

We had more children and parents today.  Play dough with coffee beans was the favourite activity.  Singing and stories followed and lots of fruit was eaten today.

We had another baby join our group group today.  Some children are feeling very safe and secure and leaving their mums side now to go and play.  We had a story about the dentist and a big set of teeth and toothbrush so we could practise brushing teeth.

We had a dinosaur story and we did some songs with actions.  Parents and children joined in too.  We had pieces of apple, pear and tangerines for our snack.

The children were just happy playing with all the toys this morning. They ate gingerbread men and fruit for snack time.

We played musical instruments and enjoyed looking at books today.

The children enjoyed playing with the animals and making music with the instruments. We sang 5 little speckled frogs and 'walking through the jungle' story. 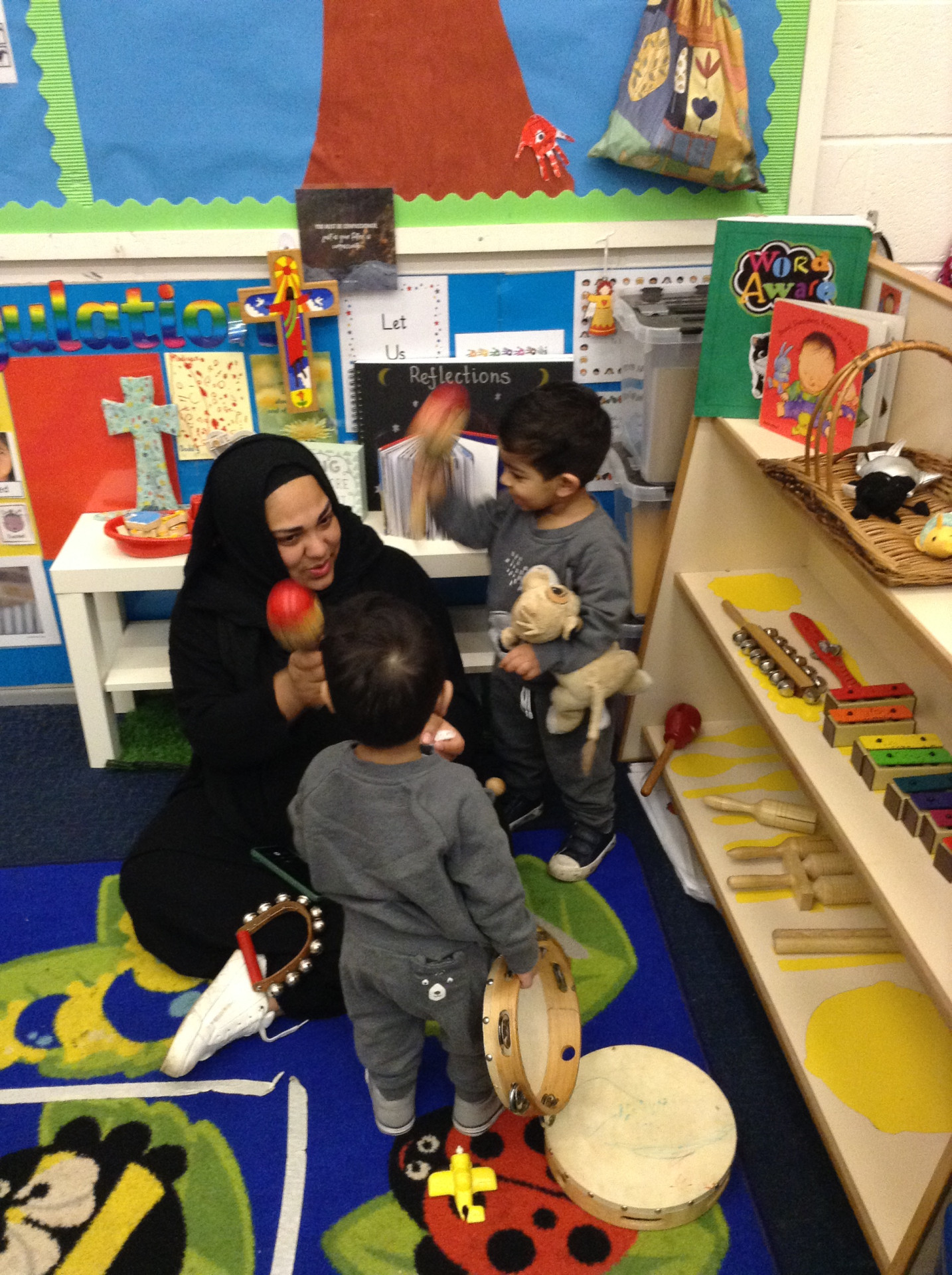 We had a new little boy who started coming today which was lovely.  We sang 'Incy Wincy Spider' and had a story 'Walters Wonderful Web'.  We looked at shapes which Walter spun for his webs.

The children settled back into meeting their friends again.  Building towers and playing in the sand were the favourite activities of the day.

Our Stay & Play families had their Christmas party yesterday.  There were games of pass the parcel and lots of party food and everybody had a fun festive time!

We had musical instruments to sing along to today, with the Spot Storybook being read to the children.

The children enjoyed lots of delicious fruit as snacks.

Mums and dads had a good chat as their children were engrossed in their play.  Jigsaws, animals, cars and musical instruments were the favourites today.  We sang and told stories to finish the session.

We had a lovely session with mums and dads interacting while their children play.

One little boy who was very shy to start with has now settled in very well.

The children were playing so well together. The mums and dads even joined in with the singing today.

We had a lot of new families come and join us for our first session back. It was wonderful to see everybody.